i think one of the things that appeals to me about this whole endeavor is the steep learning curve. that usually means there's a lot to it, a complexity that makes it all the more interesting. i'm almost done with the lessons in the book i got. it's pretty easy to tell that i'm just scratching the surface of what the program can do. Logic 8 is so new that there's not a lot of books out yet, but there's 2 promising looking ones coming out in a couple months.

i think the hard part is going to get people to record for me. to actually learn their parts well and lay down solid tracks. we'll see how that part goes. i still have to lay down the drums before i can worry about that. figure i'll be done with the lessons after this weekend and jump in next week.

finally broke down and bought DSL for the house. i was using my the G3 phone internet connection with my home computers but it just got frustrating. i forgot how damn fast dsl is.

i placed the order online. picked out the mid-tier plan. and i already had a DSL modem i'd used with Qwest from 3 years before. so there was a single fee. the price was pleasantly surprising, no hidden fees beyond taxes and a good rate for the speed. my only concern was that i'd only found 1 phone jack in the whole house. and it was wired a foot over to a connetion that looked like it was from the 50s. so the day came when the service was supposed to be turned on. i got a cd in the mail with walk-thru directions, and it all just fucking worked. i checked the download and upload speeds against what was advertised and they were spot on. amazing. that really tickled me.

and the local community college class schedule showed up in the mail so i flipped through it and found a really cool live recording class being offered. it's at a local studio that has clout so it'll probably fill fast. i signed up online right away -- even giving them my credit card info -- but i have no idea if i'll get in the class. i really hope so. i'll also be checking to see what other classes are offered in the area.

now when i put the new RAM in the machine and get it up to 4GB the only thing stopping me from making and distributing good music will be me. shit.
Posted by Skip No comments:

the keyboard finally showed up! so just when i'm starting to toy around with Logic i get this other new toy. the funny thing is i don't know how to play piano at all. and i've never fooled around with synths. but this little package seems to have it all. i know how to read music, and i hope to get proficient enough to make it useful.

i'm sure i'll find some way of adding this to the arsenal. and if all else fails, it has a high resale value on ebay!

here's some links to check out the cool things people are doing with this thing:

i've been wanting to get real keyboard/syth so i can practice my piano playing and maybe even play with some friends. seems like lots of people like to play with the alesis micron. and it's value on ebay is about as much as it goes for at guitar center or zzounds. i'd seen it at guitar center before so we went there saturday cause i was in the mood for buying since i was still waiting for my macbook and needed a toy. none of the stores had any in boxes.

well, i ordered it online when i got home and it should arrive wednesday. i need to possibly slow down and stop spending any more money! my toy list is pretty short now, so that's good.

on a side note. went to an acupuncturist today and found it interesting. he'd even heard of dystonia and brought up things only a knowledgeable person would bring up. and he seemed confident he could help. so i'm excited about that. definitely not getting my hopes up too high, but we'll see how it goes.
Posted by Skip No comments: 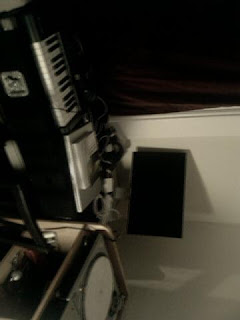 Finally got the replacement macbook! So far so good. I went through the first tutorial in the Logic book and it sounded great. And that's just using built-in audio with headphones.

I've got a lot of setup to do. Got the 2nd 21" monitor to play with. Still need to hook up the audio interface so I can monitor on real speakers and do some recording.

Psyched.
Posted by Skip No comments: 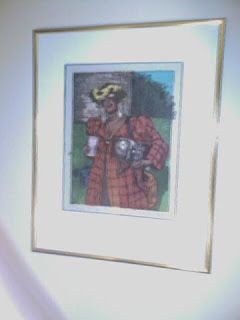 A few days of sun and then tonight we get that oregon rain. It sounds like someone has the shower on upstairs kind of rain.

I feel like bitching a bit. But i'm also wondering about this blog Where to go with it. Keep it solely on topic or make it human and have it be my outlet for all things, not just music...

Well, i'll try to pull it all together. Not too personal blog, not too dry. I guess I see the reader being someone interested in home studio but into the soft side, too.

Maybe when I finally get my computer things will change. I'm still waiting for the replacement to arrive. They've received my faulty unit but have put off the new return ship date due to "busy fulfilling other orders." I just hope that doesn't mean they had an issue with my return. It does mean I won't see a new one by this weekend. That's a bummer.

Since we are talking about music... The band to see is Birdmonster. One of my favs from last year that is finally touring. Playing a club in portland that has no box office so i'm anxious aboujt it.

If I do a Skip's Picks this year they'll be heavily featured. From Frisco. I can say that.

Oh, and I hung some art in the house finally after a year and a half.. Not sure what that means. Makes me nervous. Am I worried about mob ility with the dystonia and sort of giving up?

While I wait for the replacement laptop i'm working on setting up my studio space. My flat is small and i've already got my decks and records setup that makes almost a little work area in the living room.

The picture makes the space look even bigger than it really is if you can believe it. I'm also making this post by sending an email from my phone so we'll see if this even works.

Been reading the book I got on Logic: Logic Pro 8 and Logic Express 8. It's an Apple authorized book. So far it seems like a basic book teaching via lessons but it's already given me a much better understanding of the program. Looking forward to doing some basic recording to see how my very amateur mics and space (and skills) will sound.
Posted by Skip No comments:

Here's the latest setup. I haven't set up my audio interface yet, waiting for delivery of replacement Mac.
Posted by Skip No comments: