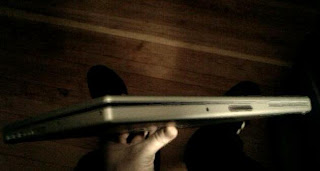 They're testing my patience over at Apple. i was all excited about receiving my new Macbook Pro 17" with extra fast hard drive and Logic Express 8. well, i opened it up and played around a while and was really enjoying the thing. but then i closed up for the night and noticed something peculiar. the lid didn't shut quite right. it's got a warp on the top so that it doesn't close flat. it's annoying. and i think they should replace it. not only does it just annoy me but it could cause screen problems down the line, etc..

so i went to the apple store. not quite the customer service mecca it's touted as. when i asked to see the first guy's manager, he said he was the manager. if that's true, there's going to be a lot of offended and angry people in that store. but it boiled down to them washing their hands of folks who buy online. especially folks who would -- gasp -- customize their order. i hate that Apple still treats its customers like idiots. i want to like them so bad.

then i got home and tried to do the return online like it said on my receipt. didn't go anywhere. so i spent 58 minutes being forwarded from department to department, some multiple times until they finally forwarded me to a department that had closed for the day (20 minutes earlier so i would have been fine if they hadn't fucked around so much). my call was disconnected. i can't decide if i should just put up with the warp or continue the fight. i'm going to at least call tomorrow and see how it goes.

i want this computer to be my pride and joy. i want to bond with it. isn't that what the mac's all about? help me out here Apple!

i know this sounds weird, but sometimes i just know when i'm going to get good service or bad before it ever happens. which probably means i'm partly to blame, i'm putting off some energy. anyway, this morning i got back on the horn with Apple. i must have been more relaxed and upbeat because the experience was completely different. they rushed me through to the right people (staying on the phone with me while waiting) and Rose was apologetic and helpful and had me set up really quickly. so at this point it's not fixed, but it sounds like they're serious about taking care of me. they'll be sending me an email with a return stamp (they're paying) and will send me a new unit expedited. if they follow through with that and the new system is awesome i will be back in their court 100%! thanks, Apple, for stepping up.

The Gear So Far

i figured it would be best to start humbly, but with decent enough gear so i wouldn't get frustrated. i wanted to start simply by creating songs alone or with a few collaborators, track by track. so i decided on a mixerless, computer-based approach with a small audio interface, a sequencer/DAW and a midi controller.

for most of my life i've been a PC user but i've been using a Mac at work the past 3 years and i've decided it's the better platform for me (i'm a software engineer working in unix-based environments). and since i needed a new computer for home i decided on a 17" Macbook Pro. i love the flexibility of having a laptop at home so i can work from the couch or wherever, and the 17" has enough screen space for the editing. that was the big expense that i justified because it will be my main computer, not just for audio production. I got a good deal on the mac by buying through a friend's discount. one bummer is the unit they delivered has a slight bend in the lid and i'm thinking of trying to exchange it for a new one.

the audio interface i chose is the Presonus Firebox. it's firewire, not usb, but that wasn't really a driving decision. with usb 2 i can't really see a big advantage of one or the other. this unit got good reviews and has all the i/o i need. i would have gone with the MOTU if i could justify the expense at this stage. for some reason i was only considering AI's that supported MIDI in/out. that's because i thought this was where i was going to plug in my MIDI controller! i'm new to this. turns out that MIDI I/O on the audio interface is really mostly useful if you're passing MIDI CC to/from other MIDI instruments. i won't even use it right away, just plug my Axiom right into the computer via USB. Logic sees it and i'm good to go. those MIDI ports might come in handy in the future if i go more advanced..

for a MIDI controller i went with the M-AUDIO Axiom 25. i wanted to have a small workstation to deal with and i'm not a piano player so i wasn't too concerned with the small keyboard. mostly i want to use it as a controller and doing simple keyboard stuff.

i'm hoping to record some live audio, basically single snippets of found sounds and shakers, xylophones, etc... i wanted a cheap, all-around mic. most people point towards the Shure SM57 but i have access to those and wanted to try something comparable. i went with the Audix I5. we'll see how that turns out.

for now i'm going to use my home stereo for monitors, it's got decent speakers. i've also got my two 1200 turntables and mixer for sampling the record collection.

Ableton Live 6 LE (a crippled m-audio version) came bundled with the Axiom and i played around with it a bit and liked it. but the reviews for Logic 8 were so impressive i purchased a version of Logic Express 8. it's not as intuitive so i bought a book that should arrive tomorrow. then i'll decide which to go with. i think Live might be friendlier for live performing, but i'm hoping that Logic kicks ass.

There's a steep learning curve to the whole process, not just the software, but the whole thing. i'm thinking of taking a class at a local college. if anyone knows of any local resources in Portland, OR, please drop me a note!
Posted by Skip 3 comments:

not surprisingly, there's a ton of good stuff to check out on youtube. everything from people showing off their gear to taking you through certain setups and even creating beats.

one of the cooler things i came across was the use of the wii remotes for controlling the audio production. everything from using it as a MIDI controller to creating virtual drumsticks! check that out! i think a side project of learning how to hack the wii-mote might turn into its own fun hobby for me! and it's a lot easier to get than the complete wii system!

here's some links to interesting stuff:

music is something i'm passionate about. i don't seem to have a propensity for creating music, but i have a desire. i started dj'ing in 1995, with regular gigs for a long time. and i played drums in a few bands over the past six years. recently i was diagnosed with a neurological disorder called dystonia. so i've got to stop playing the drums for a while. while i sort out my mental, physical pieces.

i haven't played drums since late 2007, but i've been itching to make music. i'm not sure anything can replace the physical part of playing drums, but the intellectual side of my brain has always been intrigued by audio production. why not create my own music? i started thinking about setting up a simple computer-based home studio to play around on and maybe get the musical satisfaction i desire.

along the way i've learned a bit, and more often i've had questions. and a lot of ideas. so this will be a place for me to share what i've learned, get my writing fix, maybe learn some new stuff from reader comments, and keep a list of ideas i would like to pursue.

glad you came across the blog and hope you like it. feel free to leave a comment.
Posted by Skip No comments: